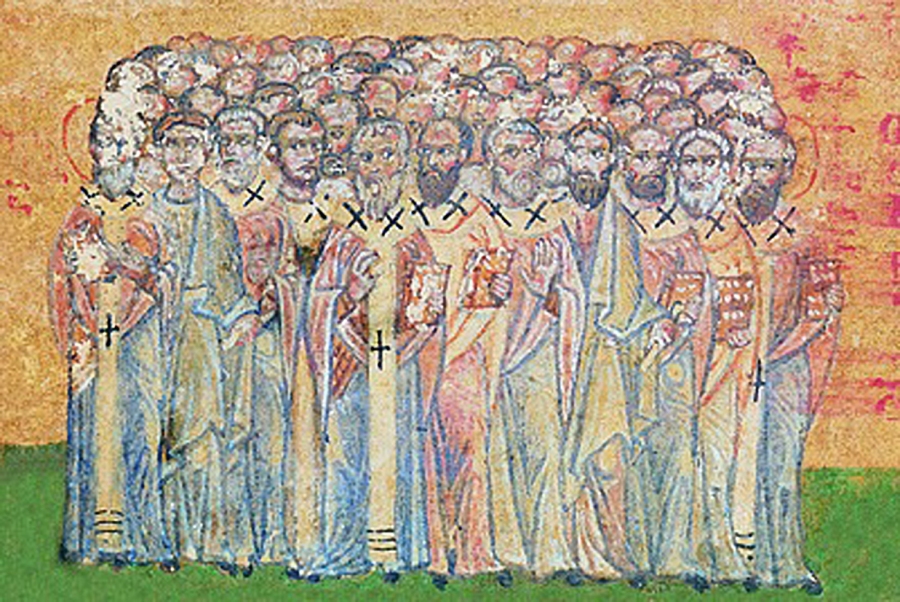 If “healing stories in the Bible” were a Family Feud category, survey says… the story of Naaman probably isn’t on the board. Which is a shame. Because it’s such a fascinating story.

So let’s recap: Naaman is an army commander, a top-ranking military official, with loads of power, money, and influence. Except: he has leprosy, some kind of vague, probably painful, skin condition that would have made him ritually unclean. And the thing about disease back then is that other people thought the person who was sick must have done something morally wrong to piss off God and so was being “punished.”

One day, one of Naaman’s household slaves happens to mention to “Mrs. Naaman” that there’s this “prophet” back where she’s from with the power to cure her husband. Word gets to Naaman, Naaman consults with his people, and off he goes, with loads of silver and gold and expensive clothes, expecting that he’d be able to bribe his way into a grand, miraculous cure.

Which brings us to Elisha. Remember him? He’s the guy who was practically running after Elijah, his predecessor, because he was terrified of being left to be a prophet all by his lonesome. Well, it turns out Elisha was doing pretty well on his own after Elijah was gone, performing miracles left and right. So what’s one more?

But let’s have a little fun with this one, Elisha thinks to himself. This big, important guest, practically Aram’s second-in-command is coming—next to him I’m nothing—so I’ll send my messenger, who’s really a nobody, out to greet him. He’ll love that. And let’s have him go take a bath in the Jordan River.

The Jordan River?!? You must be joking. Naaman is insulted. That muddy little stream? I could’ve stayed home and bathed in the biggest, bluest, most sparkling and refreshing rivers of Damascus, and you want me to do what?

After his servants talk him down, they convince him to give it a shot. Alright, what the hell? And wouldn’t you know it, Naaman is cured. Just like Elisha said.

What a story! But it has almost nothing to do with the healing itself. This is a story about how God subverts our expectations and shows up in unexpected ways.

Naaman had very clear expectations about how his healing would go down. He had money and power and Platinum-tier insurance from the HealthCare.gov Marketplace, and he was going to get the best treatment possible! In the grand rivers of Damascus with the great prophet of Israel. Instead, he gets the dingy Jordan and the prophet’s doorman.

It even took Naaman’s servants to convince him not to bail, and before that, it took his wife’s slave girl to convince him to go in the first place. Even the king of Israel, Naaman’s first stop before Elisha’s house, couldn’t perceive God’s action and was convinced this must be some sort of a political trap.

Even Naaman is himself an outsider—a foreign general who comes to an enemy nation to be healed by one of their prophets. And in the healing process, his skin is restored and becomes like that of a “young boy.” Na’ar in Hebrew, which can also mean “servant.” The great second-in-command becomes like a servant.

Reversals abound in this story, and expectations are turned upside down. Because God’s activity knows no bounds. Not the bounds of national borders, or social class, or religion. Instead, God’s grace is extravagant enough to overflow to all people.

This is a story about the widening of community and who gets to be included.

Weneed Naaman’s story and its message. We know we can’t do it all by ourselves. We need the community.

That’s the whole point of Jesus’s instructions to his disciples: He sends out seventy people ahead of him, in pairs, without money or luggage or even shoes, in order that they might rely on the hospitality of others. Jesus knows that what he’s asking them to do is hard work—work that will,at times, lead to rejection or disappointment. So he doesn’t send them out alone but together.

We know we are better together. That’s what it means to be the body of Christ. It’s why we come to church. It would certainly be possible to sit at home by ourselves, read the Bible on our phones, maybe stream a sermon on our Apple TVs. But it misses the point. We need each other. The Greek word the New Testament uses for “church”—ecclesia—actually means assembly, as in more than just one person.

And if Naaman’s story teaches us something else, it’s that the community we need is going to include people we don’t expect. And that might even make us uncomfortable for a little while.

The community God calls us into is going to include people we don’t expect, and it might make us uncomfortable. It would be really easy to pick up and leave when conflict brews or when something doesn’t go our way or meet our expectations. But Jesus says: Don’t move about from house to house. Stick around. See what happens.

Taking notice of people who are different from us, letting down our guard, and allowing ourselves to glimpse God’s grace in unexpected people and places can also lead to beautiful moments.

Like the Sunday about a year ago I was certain I was going to be late to guest preach at a church way out in the suburbs of Chicago. It was a “perfect storm” kind of morning: Hitting the snooze button one too many times and before long scrambling to get myself ready. Fighting my way through Chicago traffic. Caught up in hurry and worry that spilled over even into the service, where I never did feel fully present, even though I did make it with time to spare… up until the very end, when I was standing at the doors shaking hands and greeting people. A little kid, probably no older than five or six, runs up to me, wraps his arms around my legs, and gives me the best hug. That was the moment of grace and healing I needed that morning—all from somebody I would have least expected.

It’s not as dramatic as a healing story with generals and prophets and rivers. But I think it teaches the same lesson.

Naaman needed a dose of humility to get to healing. It didn’t happen on his terms, but the results were profound: not just a healing miracle, but an experience of grace and a confession of faith. He realized he needed his community in order to be fully cured.

Even Elisha couldn’t be a prophet without Elijah’s mentoring and a “double share” of his predecessor’s spirit. He needed his community, too, to be a prophet and a healer among his people.

And we, too, need our community, maybe in surprise hugs, and in other ways, too. But almost always in ways we never see coming and from the people we least expect.