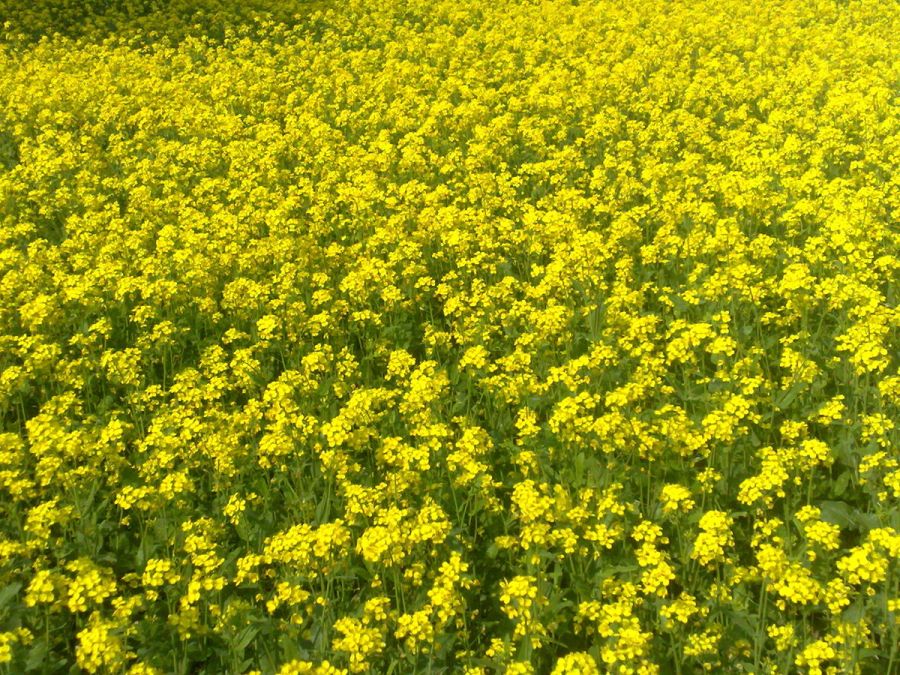 When I was growing up, I remember this giant turquoise planter in my grandma’s backyard, nestled right in the corner of the fence. Every year, it would blossom into the most gorgeous morning glories. They never just grew like normal flowers, though, but  would actually take over the fence, to the point where it was nearly impossible to see the chain-link underneath.

One year, when grandma had had enough — because, let’s be honest, morning glories are beautiful but they’re a pain to weed out of a chain-link fence at the end of the season — she dumped out the planter and scrubbed it clean. Morning glories no more! Or so she thought… until they came back the very next year, taking over her fence all over again.

The kingdom of God is like a planter full of morning glories that takes over the garden. Even when you try to get rid of it, it’s still there.

Parables, Jesus calls them, a word that literally means to throw alongside — stories that are thrown alongside our own lives, our own reality, to make some spiritual principle Jesus is trying to convey seem easier to grasp… except it almost always needs explaining and might even make the original point more difficult to understand.

Mustard plants were, basically, like weeds where Jesus lived. They were hardy, they could grow nearly anywhere with minimal human effort to keep them alive, and they were big and difficult to get rid of.

The kingdom of God is like an invasive species. Now, invasive species, as we know, are not typically, if ever, considered a good thing. Whether animals or plants or even their eggs or seeds, invasive species, by definition, are non-native species that actually cause harm to their environment. They grow and reproduce quickly and spread aggressively. I’m no botanist, but it sounds a lot like a mustard plant to me.

And the thing about an invasive species is that it’s almost always perceived as hostile and a threat to its environment.

This past week, I have to say I was a bit surprised and perplexed to hear that separating immigrant families from each other at the border is, at least according to some, “biblical.” It’s “biblical,” they say, to enforce and to obey the laws of the government — laws that would and are ripping away children, most under the age of 13, from their parents and treating them all as criminals.

I don’t know what Bible they’ve been reading, but the one I know tells very a different story: You shall not wrong or oppress a resident alien, for you were aliens in the land of Egypt… (Ex 22.21). The alien who resides with you shall be to you as the citizen among you; you shall love the alien as yourself… (Lev 19.34). Cursed be anyone who deprives the alien…of justice… (Deut 27.19). Do no wrong or violence to the alien… (Jer 22.3).

Not all invasive species are bad. In the natural world, researchers have found that certain invasive species actually benefit their ecosystems: butterflies in California that feed on non-native plants, non-native trees that have helped restore pasturelands in Puerto Rico, even the infamous non-native zebra mussel that helps filter toxins from lakes.

And what happens when the environment the so-called invasive species is in is itself hostile and the real threat? Well, that sort of flips the tables, doesn’t it, and subverts what we mean by invasive and threatening.

In the context of the hostile kingdom of the empire, the kingdom of God is one invasive species to be welcomed.

In a hostile kingdom that separates families, that oppresses the other, that respects “law and order” more than human life and dignity, the kingdom of God invades. It comes perceivably out of nowhere, when and where we least expect it, and it spreads like wildfire, without regard for borders or boundaries. The kingdom of God is an invasive species that threatens to choke out the status quo of injustice and fear.